International Transgender Day of Visibility takes place annually on March 31st as a day to celebrate the lives and impact of transgender individuals and bring awareness to the continued discrimination the community faces. 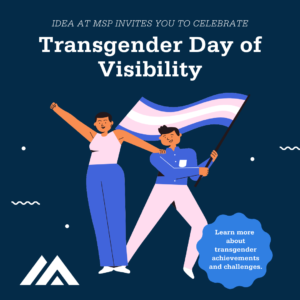 IDEA would like you to join us in celebrating Transgender Day of Visibility. This day is meant to commemorate the many achievements and contributions made by those in the transgender community. It is also a time to reflect on the many challenges the community continues to face. Much of the current information being shared about this vibrant and wonderful community is highly polarized. Often, the truth is hidden beneath political agendas, toxic sound bites, and information that is deliberately misrepresented with harmful intent. To truly honor this community and its many contributions, despite the constant struggles it has faced, it feels like a pertinent time to share an overview of some truthful history and science with you all.

Transgender and gender nonconforming people have existed throughout history. There are cultures who have always not only accepted transgender and gender nonconforming people, but hold them in high esteem. In many Native and Indigenous communities, there are people referred to as Two-Spirit, individuals who were thought to exist outside of the gender binary and often filled special spiritual and religious roles as healers or shaman. While much of the expression of Two-Spirit people, and other transgender or gender nonconforming people throughout history,  was done via clothing and nontraditional work roles, medical interventions did begin occurring earlier than most realize. Surgical and medical interventions began as early as 1922 by German physician Magnus Hirschfeld at his Institute for Sexual Science in Berlin. Unfortunately, much of this research was lost during WWII and the Nazi book burnings of 1933, when Hirschfeld was forced into exile.

Contributions from the Transgender Community

When looking at history, it is important to recognize the contributions to our society from those who belong to the transgender community. From artists to actors, physicians and politicians, the range of accomplishments and societal progress is exceptional, especially when accounting for the marginalization each of these people have faced along the way. This is a small list to highlight the range of contributions from transgender community from which our society has benefited.

Current medical research is seeking to understand and explain the multiple chain reactions that happen in utero, and how those events can possibly trigger an incongruence between sex and gender. Much of the research centers around the SRY gene which is located on the Y chromosome, and its need for exact timing to activate male sex differentiation. This research may be key in bridging the gap between sex and gender, although there are also many other factors, from biological to environmental and more, that interact with genes and require further research.

While research on the physical components of being transgender is vital, so is research regarding the mental health impacts due to gender dysphoria, discrimination, and marginalization. A recent study done by The Trevor Project called The National Survey on LGBTQ Mental Health 2021 indicates that 42% of LGBTQ youth attempted suicide in the last year, including more than half of transgender and nonbinary youth. Transgender and nonbinary youth who had their pronouns respected by all the people they lived with attempted suicide at half the rate of youth who did not receive that respect. And a startling 48% of LGBTQ youth reported wanting mental health services, but were not able to receive such care. The medical and mental health struggles faced by this community are only a part of the picture.

There are currently dozens of state legislative bills being passed or proposed that specifically target the transgender community, focusing on transgender youth and affirming health care. Some of these bills not only attempt to criminalize providing affirming health care to children and adolescents, but also assert that parents are abusive for seeking it out. In some states, parents are being investigated if their children are undergoing gender affirming treatment, which may result in their children being removed from their care. Other laws are banning transgender youth from competing in sports with a team that matches their gender. Much of the information being cited about why this is necessary holds no place in scientific fact, and it becomes just one more way of excluding and discriminating against the transgender community.

As current and future psychologists, cultural competence is a cornerstone of what we must embody. Understanding a culture in its fullness is vital to truly be able to meet our clients where they are. Social justice matters greatly impact the mental health of each one of us, no matter our identities. Being part of a humanistic institution with rigorous scientific standards means we must see the whole person, understand their cultural context, and embrace the emerging science. Most importantly, we must recognize that our education is a point of privilege which we should always use to lift the voices of those who are marginalized. We should help make what some want to legislate away, discriminate into silence, and keep invisible, visible. Thank you for taking the time to honor the transgender community, appreciate their contributions, and recognize their struggles. Please take this information into the world with you and use it in a way that can help heal.

Many sources were used to write this post. They are listed below for your further review.

Further resources for your review: 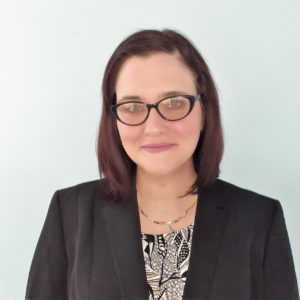 A special thanks to Monique Nash (MA), IDEA President, for all her work in composing this blog.