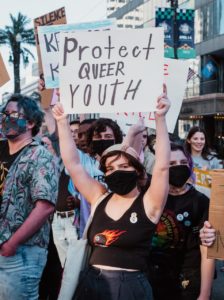 Imagine you’re 15 years old – an age where the most important thing in your life is to fit in.

But you know you’re different. Maybe you have no romantic interest in the opposite sex, or perhaps you don’t experience romantic attraction at all. Maybe you know that the gender you were assigned at birth was wrong. With this discovery you become overwhelmed by feelings of fear and anxiety. You’ve heard people say that being gay or trans is wrong as best, disgusting and sinful at worst. What if your family and friends reject you? You’re feeling alone, hopeless and afraid.

Your classmates sense your secret, and you become the target of ridicule and threats. You search desperately for help, but no one has your back. In fact, when you go home and turn on the news, you see the very people who should be protecting you working to strip you of your rights and isolate you even further. You live in a state of helplessness and hopelessness.

This may not be the experience of all queer youth, but it is for far too many.

Gay and bisexual youth are about 3.5 times more likely to attempt suicide than their straight peers and transgender youth are almost 6 times more likely to attempt suicide then their cisgender counterparts. Research has consistently shown that support from family and friends leads to improved self-esteem, self-acceptance, and overall better mental health and well-being for LGBTQ+ youth. As Amit Paley, the CEO of The Trevor Project said, “The fact that very simple things—like support from family and friends, seeing LGBTQ representation in media, and having your gender expression and pronouns respected—can have such a positive impact on the mental health of an LGBTQ young person is inspiring.”

Over the last decade we’ve seen great strides made in LGBTQ+ rights and representation. Most notably was the 2015 Supreme Court decision that ensured same-sex marriage would be legal in all 50 states. Following this decision, the disparity in life satisfaction between LGBTQ+ adults and straight adults dropped drastically. In 2021, the number of LGBTQ+ characters on television reached an all-time high (12%) and a growing number of public figures came out, including:

Increased representation is an inspiration for young people in the LGBTQ+ community – and helps increase acceptance in those who are straight and cisgender. But in the last year we’ve also seen a renewed effort to reverse that progress. 2021 was the worst year for anti-LGBTQ+ legislation in history with more than 25 bills becoming law. Unfortunately, this trend is on track to continue in 2022. So far this year there have been 300+ anti-LGBTQ+ bills introduced for legislation across the country; more than 100 specifically target transgender and gender non-confirming youth.

In my clinical practice I was painfully aware that my queer clients left the safe, supportive and affirming environment of the therapy room often to return to a hostile and dangerous world.  When their families withhold support and bullies’ prey upon them in school and elsewhere, opportunities for healing are compromised and the potential for tragedy increases. Each step in the direction of continued protection under the law for sexual minorities is a step toward safety and physical and mental health.

*In this instance actor is being used in a general neutral manner as it is the term Lee uses in her own description of the accomplishment.