Student Experience: How Do I Start a Research Project?

Jared Boot (PsyD 1) became engaged in the MSP community from day one of the MA program. In addition to serving as Student Ambassador, joining IDEA, and speaking at the first Annual Cultural Competency Conference, all while completing his MA, Jared sought an active role in student research. Below, he shares his process on how to get started.

When I begin brainstorming for my first research project, what came to my mind was thinking about what issues I am passionate about. Some of the things that come to mind for me are under-researched populations like asexual and genderqueer communities. Also, sociopolitical issues I care about like trauma inflicted on minority groups that political elections. Or new standards of care in clinical psychology like prescribing privileges for psychologists to help with the shortage of prescribers of psychotropic drugs.

After narrowing down a research topic, of asexuality, I sought out an easy to read and well-known book on the community of interest. In my case, it was the author Julia Decker’s “An Invisible Orientation.” After reading that book, I had many ideas bouncing around, so I connected with faculty researching similar issues in psychology. In this case, Dr. Shepler’s LGBTQ Research Forum, which piqued my curiosity. Specifically, what the research the team was doing was research regarding relationship satisfaction and the LGBIS, which is a scale that measures identity development in LGB individuals. It was pretty fascinating!

I was so captivated by the scale and wondered why there was only a measure for LGB individuals. I knew the theory the scale was based upon; Meyer (2003)’s Minority Stress Theory. This theory posits that social stigma and discrimination can impact identity development. However, in the year 2018, with LGB identities becoming more normalized, it seemed especially urgent to have a scale that included emerging queer identities like asexual individuals.

I began a literature review using the library databases, and it turned out I was right. Researchers such as Borgogna et al. (2019) found that emerging identities in the queer community had even higher measures of anxiety and depression than LGB individuals. As a career changer and somebody new to the field, I was unsure what direction to go from there. So, I brought my findings to my research team and asked for advice. The recommendation I received was to work on scale development.

I could not develop a scale focused on multiple dimensions of identity development through one research project. Consequently, I narrowed in on acceptance concerns; this is a person’s preoccupation with perceived stigma and prejudice they experience from society. I went back to my literature review and found examples specific to asexual individuals of concern with perceived stigma and bias. I then formulated survey questions based. I wrote up an IRB proposal with my team, and after it was approved, I found relevant online asexual communities and distributed the survey I constructed. 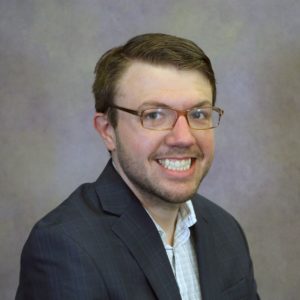 Jared Boot, MA (’19) will begin his first year in the doctoral program in September.